Plum jam was an experiment for me. I used my blackstrap strawberry recipe, just swapping out the berries for whole, unpeeled plums. I thought I could use the jam as a plum sauce stand in.

What I ended up doing was modding (very slightly, I added a lot more sriracha and no extra garlic) this recipe. I’m going to need to can more plum jam.

-Splash of black or balsamic vinegar

-Sriracha, to taste (that means a lot of it for me, probably not so much for me)

Finely slice chicken breast. In a bowl combine all of the sauce ingredients. Sauté chicken breast until almost cooked through, then add the sauce to the pan and let reduce down. Alternatively you can cook down the sauce in a separate pot and toss with cooked chicken.

Want to try it with strawberry? Strawberry sriracha chicken

coffee with us three

What Fears Become: An Anthology from the Horror Zine, Book 1

Accessed as an E-book

I’m pretty fond of anthologies. That’s something that comes up in a lot of my short story reviews, I do have a weakness for anthologies. However, even with my love of anthologies I sometimes get a little wary of small presses because unfortunately I’ve come across collections that it is pretty obvious that they wouldn’t have made it through a major press. This anthology didn’t have any of these problems and the editing on the book is quite solid.

The short stories in this collection have a really good flow, and all of them are really solid. It’s rare for me to want to read everything in an anthology but I finished all of the stories in this collection. There are a few stories where ‘horror’ is probably not the best word for the piece, but even in those cases I greatly enjoyed the stories. Oddly, my favorite in the collection ( ‘Fish Night’ by Joe R. Lansdale) is one of those stories but if you lump ‘surreal’ into ‘horror’ then the story works-and frankly, I can think of quite a few people who would be more than a little unsettled by the premise of that tale.

One of the things that I was most impressed with this book was that a lot of the stories work with familiar themes in way that don’t feel stale. The stories aren’t just reworks of traditional horror stories, though there are a lot of nods to world folklore that I always like seeing in a collection. The lamia makes an appearance, as does a pretty interesting working of the Old Hag.

I’m looking forward to the rest of the books in this anthology series, and hope that Rector can stay with this level of editing.

Let’s sweep out the past year. It wasn’t one of the top 10 anyway.

Brooms have a long standing place in superstition and folklore. Brooms are such a simple item, but have such importance.

Brooms are like water, they can bring energy into or out of a home. In that sense, most of the folklore has to do with being careful in using a broom to make sure that you don’t bring luck into or out of a space.

-When a person or family moves into a new home it’s considered prudent to gift them with a new broom, to be hung over the most used doorway. Similarly, a new couple should be granted a new broom as well. The old broom should be washed with clean running water preferably and discarded with intent.

-Don’t store a broom upside down (resting on its bristles). Breaking a broom’s bristles are considered to be bad luck.

-Brooms can sweep luck into and out of a house…

In 1911, two British sisters Dora and Claire Williamson sought the services of Dr. Linda Hazzard. Hazzard, who would most likely be called a natural medicine practitioner in current terms, promised to cure both sisters of a series of ills via the fasting method-effectively, that with holding food is the best thing for the body. However, the treatment that they received would ultimately result in Claire’s death.

Through her sister’s passionate insistence, Hazzard would stand trial for Claire’s death-ultimately due to the way that Hazzard’s patients were often found dead, often after signing over their estates to the ‘doctor’. Hazzard’s weak credentials were used evidence against her-while fasting was not unknown as a practice, she had only been awarded a medical license after a fierce battle with the state of Washington.

The first half of the book examines the events leading up to Claire’s death, often with a deep enough depth of detail to sufficently creep me out that I could only read 10 or so pages at a time. The second half the book looks at Hazzard’s trial and the last years of her life. Part of what makes this book so intense is Hazzard itself; her dedication to her ‘cure’ is deep enough to suggest that in no way did she ever recognize her role in the deaths of her patients.

Welcome to a special edition of Fall Into the Holidays! I hope that you had a wonderful year full of great memories. Please feel free to link your favorite and highest ranked entries of the past year. Link up as many entries as you would like, as well as your favorite pins!

Remember! I’ll be pinning all entries linked up to the Fall Into the Holidays board-please let me know if you want to be removed.

Feel free to share your seasonal recipes, diy, crafts, and other related material. Please link to entries, and not your blog main page. Click around the list and leave a few comments!

Please remember to link back to this party on your entry and have fun! Please click the icon below. The link up loads in a new page.

Whispers in the Dark

Adults aren’t supposed to admit to being afraid of the dark, though we all know that we are. Maybe not all the time, but every once in awhile even the strongest among us will jump at something in the shadows.

What do we  do when the dark becomes the only thing that’s saving us?

A month prior to the start of this short, something has occurred. The narrator seems to be unwilling or unable to tell us what that something is, and while it’s on one level annoying, this lack of information ultimately strengthens the tension by depriving us of some of the logic necessary to process what’s going on. And the absurdity of what’s occurring-which on one hand seems almost silly and on the other hand truly almost hellish (in as literal a sense as one can get)-makes it that much more horrific because not only can you not see it, what you aren’t seeing is probably laughable. Not probably, apparently is laughable.

Just remember…don’t leave the night light on for this one. 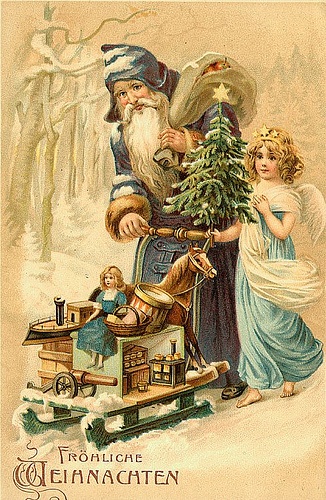 Movement was 2013’s word of the year, and what a long, strange trip it’s been. In a lot of ways I’m still where I was this time last year- and with a little bit of sadness, some of those ways were the places I was hoping to have the most movement. However, some of the decisions that put me there (left me there?) were conscious decisions made by things I learned through movement in other places.

In other words, sometimes when you leave you find yourself right back where you started. And sometimes that’s a good thing.

Learning is one of those words that’s a little scary. I know full well that part of what I Learn (capitalized for a reason) may be scary. It’s probably going to be things that from a comfort standpoint I probably would have liked to not have Known. I’m hoping the Universe will be gentle enough with me to at least grant me the Wisdom to understand what it is that it teaches me.

Here I go, throwing myself down a rabbit hole knowing that like Alice, whoever’s coming out will not be the person who went in.

Bottom’s up and safe journeys. May 2014 be a gentler year on us all.

Please, stop by this week’s Fall Into the Holidays or Inspired Weekends!