My great homesteading successes so far have been closing the storm windows and practicing with a pour over coffee maker.

The thing is life has been interesting since my last update.

There was a train crash involved. An actual literal train crash that included reversing for two hours into Rochester and school buses into Syracuse to finish the trip.

So while there hasn’t been a lot of homesteading work, there’s been plenty of energy everywhere else.

I’m putting this on its own tab…

This is the lead in holiday to my favorite quarter of the year and I started out posting a literal ad on my Facebook asking for someone to do ANYTHING for Halloween. I was looking at a drought year.

Then we got to today where I’m so overloaded with the holiday that I’m ready for a Christmas party.

Somehow our work decorating contest turned into a full on haunted house. Multiple rooms, jump scares, coherent story line, the whole set up. I suppose I can cross haunted house experience off my bucket list.

And somehow I set this whole thing up (I mean that literally I generated most of the theme) to center on zombies and zombie making. Our team mascot is now Puffy the Puffer Fish.

The kicker is that I hate zombies.

The rest of Halloween rolls into horror. So much horror…Including Halloween.

Listen my feelings on slasher flicks hasn’t changed much in my review hiatus but I. Love. This. Movie. It’s a hell of a ride. See the first film, maybe the second, but definitely this one. I should sit down and completely review it. My major take away is that it feels more like a Western than a horror film but that’s actually a strength of the film. More on that later.

In other heavily hyped horror that I need to review: Haunting of Hill House. One line review? This is grief fiction pretending to be horror because it uses horror tropes. It’s heavy handed and takes itself too seriously and there is true horror that does this better. I suppose if you need a bridge into horror or really love symbolic horror it would work for you but it honestly failed on all major fronts for me.

I guess I’ll end with one last hyped horror, the new Sabrina. It was enjoyable. It’s a little Mary Sue and it does that remind you it’s horror via no bright colors thing but it was an easy watch.

At some point I need a page update but I’ll get there.

Mitten season is here in a big, big way. It’s going to be a lot of mittens for the next few months.

I always feel weird posting about charity knitting. Like I’m looking to be validated for something that should be done because you want to, not so that other people will tell you you’re doing a good job.

But my finished project entries are as much a running record for myself as anything else.

My local Starbucks is collecting for Compass House this year, so this is the first scarf I’ve done for charity this year, and it went into the box.

I have gone back to small scale commissions.

I had a ball of yarn left over from a commission that I took, for another scarf. I had posted a link to the Celtique pattern, and a minor bidding war broke out [the designer allows for small scale sales of this project, so no weirdness there]. This was a fairly fast knit. My only ‘issue’, such as it is, is that I think the yarn may be light bulky weight, because I knit to yardage, knit the full ball and the scarf is still slightly shorter than what I would have liked.

My burn out has actually been driven by boredom-which I didn’t discover until I returned to cabling. I’m happily knitting again as long as I don’t think about the intensity of the pattern (and I’m cabling).

*Because of the commission aspect, I will be listing value at the end of the listing.

-Pattern by Collete Audry, on Petitboutdemoi

I can’t believe I never got around to posting this project.

These pictures actually date to Knife. However, this year has been so snowy that it doesn’t make a difference, and I wear this project all the time now.

One of the joys of being a veiled knitter in a snow belt is that there’s no such thing as a ‘too small’ shawl. If you can get it tied to your head, it becomes a winter weight wrap.

I was warned that this pattern knits up small, so I kept adding reps until I got bored. And the warning was right- it’s barely kerchief sized with the extra reps. But, I even said while knitting it that too small just means new wrap-so that’s what this is used for, to good reception.

I love this yarn, but it has a reputation for being a brat. I don’t get it. It’s a roving style slightly thick or thin yarn. I’m not gentle on my yarns at all and I still don’t have the problems that people claim to have with it (and I use it all the time). Just don’t yank on it with every stitch and be aware that it’s not tightly spun while pulling work out and you’ll be fine.

Pattern: The Age of Brass and Steam

I still can’t photograph hats for finished knitting projects when by myself…and Mid is rarely around (or willing…or, oddly, capable of producing the types of shots that I want without me devolving into a borderline tantrum. Me: take a photo of the hat. Mid: Okay. Me, going home and looking at the camera:…why are all these shots from like 15 feet away. Mid: I did what you asked. I took a photo of you wearing a hat. Me:…I’m going to stick with my terrible only half a hat at a time and never the back of the hat selfies).

I want you to know that I endangered myself for this hat.

I almost fell off of the step trying to get photos. Because I’m just that graceful.

I am in fact capable of knitting things other than socks, hats, or scarves. But most of my knitting time is on the bus and I’m not going to try to work an armhole on the bus. Maybe on the train…but not on the NFTA. So most of my projects turn into simple things that I don’t really need to have he pattern out for.

This hat was supposed to be for sale or trade, or at the very least, for donation-but I should never be allowed to write a hat pattern because I finally just let the lace devolve into chaos lace and do what it wanted at the crown. I’ll wear something like that but I’m not going to ask someone else.

The next hat should go better. It’s just a rib.

There seems to be some great confusion about this Buffalo storm on Facebook…and I’m having people who don’t live in this city kindly trying to teach me about the city I live in when they don’t live here themselves (yes, that was snarky. I’m a snarky person. Bourdain is my hero).

Please…PLEASE…if someone from Buffalo tells you that the south towns are getting snow…please don’t tell them to stop changing the subject by shifting the conversation to towns not related to Buffalo-because it is the Buffalo storm after all.

So if you see someone talking about the south towns getting hit…we are in fact talking about the same storm. Because I’m frankly getting tired of admittedly well meaning people telling me they don’t understand why I’m talking about Cheektowaga when it’s the Buffalo storm. Buffalo isn’t a giant mono-city. 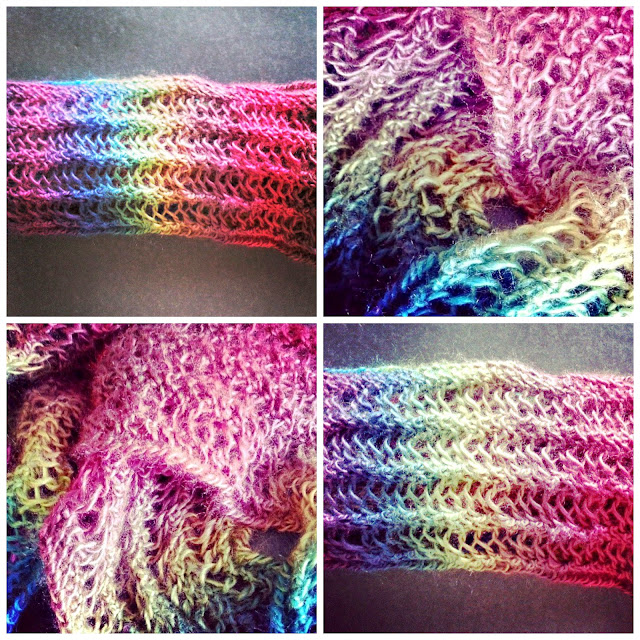 We’ve been working on what I call the Purge.

We’re fighting our way through the spare room, so we can fit more of Mid’s rig in there and I can have a Christmas tree.

It makes for a decided lack of free time to bake or work on blog projects…but downsizing is good for the mind so I guess that it’s a decent trade off.

The knitting group I’m a part of donated a basket to a Veteran’s Day raffle this week, and I worked on several simple projects to have options to add to the basket. This is another one row lace scarf (I’m obsessed, I tell you, with one row laces right now) but the colors didn’t work with the rest of the donations. I’ll add this to the gift pile.

Because this is the year of no sun, I couldn’t grab a single decent shot of this project. I tried on three separate days. Just…nothing. If I hadn’t been lazy, I would have gotten out the Nikon and tried that, but honestly, my camera shots are just as bad as the phone shots and I don’t have to kick Mid off of his computer to upload anything.

Tearing out old projects for yarn used to be a much more common thing than it is now. It used to be so common, in fact, that I have patterns in my collection from the war rationing days that detail how to hide flawed yarn (the trick is patterned stitches).

I don’t necessarily have to ration yarn, especially in the era of Red Heart going on sale for $2 a ball, and frankly, I don’t mind working with Red Heart. I’ve never minded it. But if I have a garment that I haven’t worn for years, then there’s no reason I can’t take it apart and refashion it.

I had this red wool scarf since high school. All I remember about the wool is that it’s handspun, in the grease, and I purchased it at a craft barn in Rhode Island. I didn’t have any remote idea on yardage or weight but I guessed worsted by the hand and stitching.

When I went home from Rhinebeck, I took the scarf apart one night, let it break off where the scarf was felted and discarded those bits, and reballed the wool. If I had time I would have washed and dried the wool under tension, but I worked with it energized.

I have a collection of exceptionally simple scarf patterns for charity and/or travel knitting memorized, so I cast on a skinny version of the one row lace scarf (Ravelry link) and knit on the way home from Rhinebeck. I lost enough yardage from the tear out that I couldn’t knit to the same width and length, but taking in the width let me get enough length for a usable scarf.

Honestly, it could have handled a jump in needle size but the fabric isn’t too tight, it’s just not traditional lace-drapey. But I’ll probably wear this instead of the moss stitch it started out as, so it balances out in the end.